Two brothers inherited from their father a large square in the shape of a triangle, surrounded by trees. They decided to divide it into equal parts in a straight line like this, so that the shortest possible fence could be placed on the common border.

The work of the surveyor was not easy, to which they made such a request. However, he began to remember various geometric patterns and finally found a place, in which it was necessary to draw the border. Let us follow his reasoning:

We also know from elementary geometry, that the areas of two triangles having one common angle are so to each other, like the products of the sides making up that common angle. 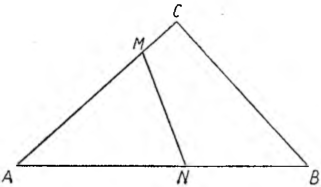 On the basis of the above premises, ABC belonged in a triangular plot (see the drawing) from vertex A., whose angle is the smallest, set aside along both sides the sections AM = AN equal to the proportional average between one of the sides AB or AC and the half of the other side. The MN line will be the line of the boundary you are looking for, because
Δ AMN : Δ ABC = (AM • AN) : (AC • AB),