I. Metoda La Hire’a. The above-mentioned method with some modifications can be used to build even-even squares. The first auxiliary square is filled with the expressions of progress 1, 2, 3, 4, on the first line in any order, with this only reservation, so that the numbers complement each other in the whole square, so 1 i 4 and 2 i 3 are located in mutually corresponding fields, that is, symmetrically about the center of the square; we get a magic square with the sum 10.

The second auxiliary square will contain the progress 0, 4, 8, 12, that is, beginning with a zier and composed of successive multiples of the number of side scales. The first column of this square contains numbers in any order, and in the following columns the same should be followed, above, the rule of symmetry of numbers. We get the second square with the sum 24.

Adding the numbers standing in the appropriate fields of these squares creates a third square with the magic sum 34.

II. Metoda Delanneya i Mondesira, It is a completely modern method, extremely simple, and at the same time ingenious, you can say straightforwardly - witty. We will depict it for greater clarity in the square - the eighth order, that is, 64 poles, but it can also be used for 16-square squares. It should be in this square by marking certain fields, as shown in the picture, create a kind of chessboard.

Careful consideration of the example given here makes it clear. The resulting square has a magic sum 260. 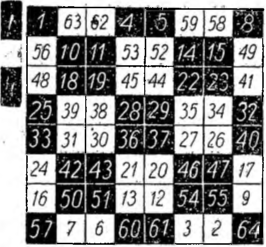