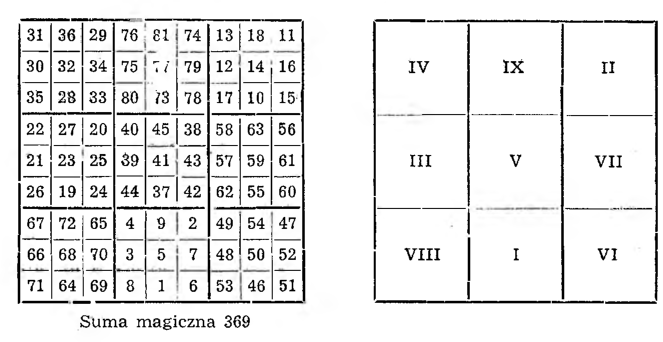 The Arnoux method is a kind of transition from ordinary magic squares to squares with special properties. It is, strictly speaking, the recipe for matching odd squares only such, in which the number of side scales is a multiple of three. But at the same time it results in a magic interval square.

The best way to explain it is with an example, to which we take the square of the ninth row, that is, Fr. 81 fields, Let's break it down into nine squares of nine fields and. taking nine words of progress in turn 1, 2, 3, 4, 5,. .., 81, we put nine squares of the third row; then we place them according to the magic nine-field square rule, as indicated by Roman numbers.

If we start compiling the square using this method of the fifteenth row (15 X 15), then we will use one of the methods indicated above for odd squares to distribute these nine-field intervals.

The special property of such squares will of course be this, that they are not only magical in their entirety, but the squares in each particular compartment are also magical.

and build nine-field squares from this progress, and then fold the square of the ninth row from them. We will then also get an interval square, but different than before.

Even-even interval squares are constructed in a similar way, but a slightly different way. For the statement of the interval square of the eighth order, the natural sequence of numbers is divided from 1 do 64 into eight parts and from parts one and eight, the second and the seventh, the third and the sixth, and finally fourth and fifth, in other words: with complementary parts, the four squares of the fourth row are compiled according to one of the methods previously mentioned; each of them will have a magic sum 130. Then a square of the eighth row is compiled from them, which is thus an interval square.