As we have already indicated, the fewest rules exist for the construction of this type of square, and all the methods are complicated and hard to remember. We quote the relatively easiest one here, whose creator is La Hire; but it too is far from being elegant, what characterizes the methods mentioned above. Proceeding similarly to even-even squares, we build auxiliary squares: the first of progress 1, 2, 3, 4, 5, 6, the second in progress 0, 6, 12, 18, 24, 30. Both of these squares are not magic, but their diagonals give a magic sum. When we sum these squares, we are also not getting the magic square yet. 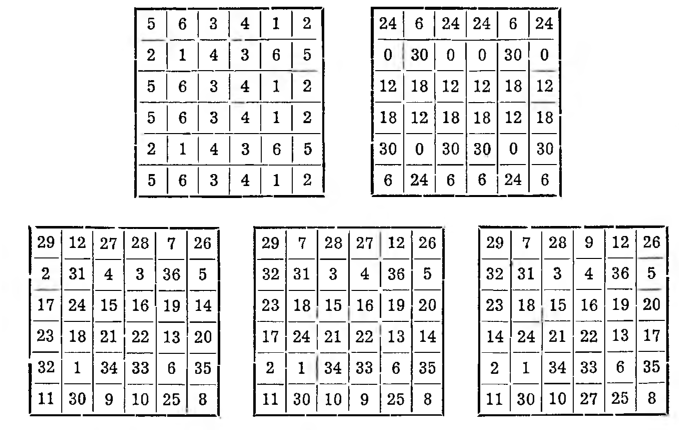 These displacements can be reduced to three general rules. Without touching the numbers standing on the diagonals, it changes in turn:

Of course, you can take the last row and the last column instead of the first row and the first column, it is also possible to modify the 2 ° and 3 ° adjustments, as long as you do not touch the numbers on the diagonal fields.

By building a magic square with auxiliary squares, you can plan, that there will be a certain number in a certain field, and it is relatively easy to do. E.g, when we want, so that there is one in the middle field, then we start the construction of the first square from this field and put it there 1, and in the second square we strive for it, that it would fall out in that field 0.