There are many different methods of building magic squares. Among them, the most common are the rules for composing odd squares, least for odd-even squares. The rules listed below are relatively the easiest, and at the same time the most interesting.

We only provide general outlines of these methods, deliberately without specifying them, so that the reader can, remaking them on your own initiative, find new and interesting varieties. 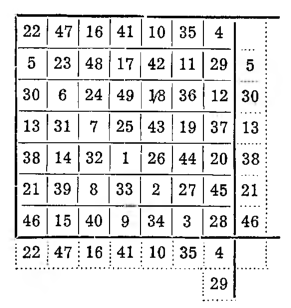 I. The Hindu method given to European mathematicians by the above-mentioned Moscopulos. For example, let's take a seventh row square, that is, 49-pin. We put one in the box directly below the middle box and from it we write down diagonally towards the right side of the next terms of the natural sequence of numbers.
Four will be out of the square now; we transfer it to an analogous area inside the square.
The five will go outside the square again; we do the same with her, as with four. Having come to 7 we come across a field already occupied by one. In this case, we bet 8 under 7 two fields lower, and we continue with the same printing of further numbers up to 49. The result is a square with a magic sum 175.
It is worth changing this method on the square of a different row by placing it 1 instead of under the center square, above that square and moving diagonally in the opposite direction. 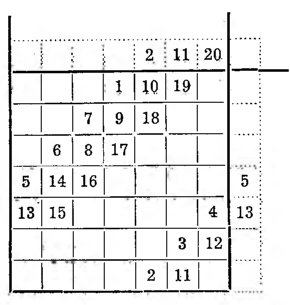 II. Syamian method. It is given by La Loubere in his work entitled Du royaume de Siam; he was Louis XIV's envoy to the King of Siam (1687—1688) and there he got acquainted with this method.

The first word of progress is placed in the middle field of the top row and the following words are written in the direction to the right upwards, proceeding like this, as in the previous method, with the only difference, that having reached e.g.. with a seven to enter the field already in use 8 not two squares below, but directly below the seven.
It is also recommended to try this method on other squares by placing them 1 not in the top, but on the bottom row.

III. Metoda Bach et a, one of the most beautiful and simple. It consists in adding four auxiliary pyramids to the square on all four sides, as shown in the example of the square o 25 fields.

Then starting from any vertex of one pyramid and following a line parallel to the diagonal of the square, all are entered consecutively 25 numbers, and then the numbers outside the sides of the square are transferred into it like this, that the pyramid I fits around 19, a pyramid II all around 9 and so on.

The result is a magic square with the sum 65.