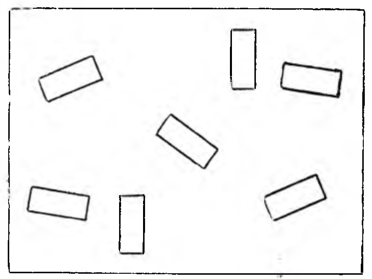 To play, you need a rectangular sheet of paper and any identical geometric shapes with a center of symmetry, e.g.. domino bones, matchboxes, identical coins.
Two people are playing. The draw decides, who is to start the game. The drawn player places the first chip anywhere on the paper. Then the other player places the chip in the free space of his choice, And so in turn both players place chips as long as possible, as long as there is enough space.
Once placed, the bar cannot be moved. This one loses, who will no longer find a free space for the placement of the chip, when his turn comes.
You can find this way to play, where the starter always wins.

Here's another variation of the game: Both players prepare three zloty coins for each other, 3 coins after 50 pennies, 3 coins after 20 pennies (or after 5 pennies) and any number of coins after 10 pennies. The player selected by fate should place one of his larger coins in the center of the paper (so not a dime) in this way, for the eagle's head to fall out right in the middle of the paper; the next coin is placed by the partner, etc..