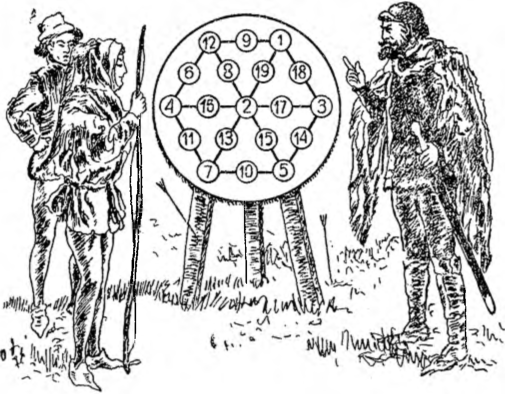 In England, in the olden ages, archer associations were famous, which rivaled not only with the accuracy of their masters, but also originality, be the ancient origins of shields, which served as the purpose of performances and competitions.

When a young adept was admitted to a union, the supervisor usually had a long speech to him about the great dignity of the union shield.. The shields were various. There was e.g.. relationship, who boasted a numerical shield of the sum of three numbers in all directions, always the same.

A certain archer missed badly: the arrows went into the ground or, at most, into the supports of the target.
"You're going to be fine," said the superior, and began to dwell on it, that to such a dignified shield, what kind of second in the world does not exist and cannot be, it is bad to shoot "just anyone"!.
- Go, learn to shoot fences diligently. After a year you will come, We will try. 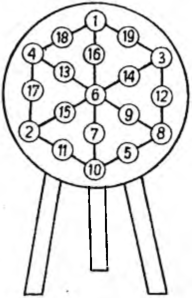 The young man listened to this speech humbly, gone, but at the next union shooting he returned without a bow, but with a second target, no worse than this, which he was forbidden to shoot at, though with a different spacing of numbers.

So he convinced his supervisor, that he also missed by claiming, that there can be no other such shield in the world.
And can there be other such "dignified shields?"?”