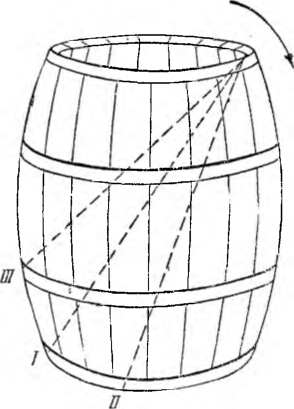 Here is an explanation:
We have no math joke in front of us, but a real geometric task, although the solution is ridiculously easy.
If the barrel was really half full of water, it tilted the barrel like this, so that the surface of the water would reach its shore, we would see, that the higher point of the bottom is also on the surface of the water (level I in the drawing). This is because of this, that the plane drawn through the diametrically opposite points of the upper and lower circumference of the barrel divides it into two equal parts.

If the water is less than half the barrel, then at such a slope a smaller or larger section of the bottom must come out of the water (level II).

Finally, if the water is more than half the barrel, the bottom will be under water when tilted (level III).

This way, without any measurements, we have an exact answer.