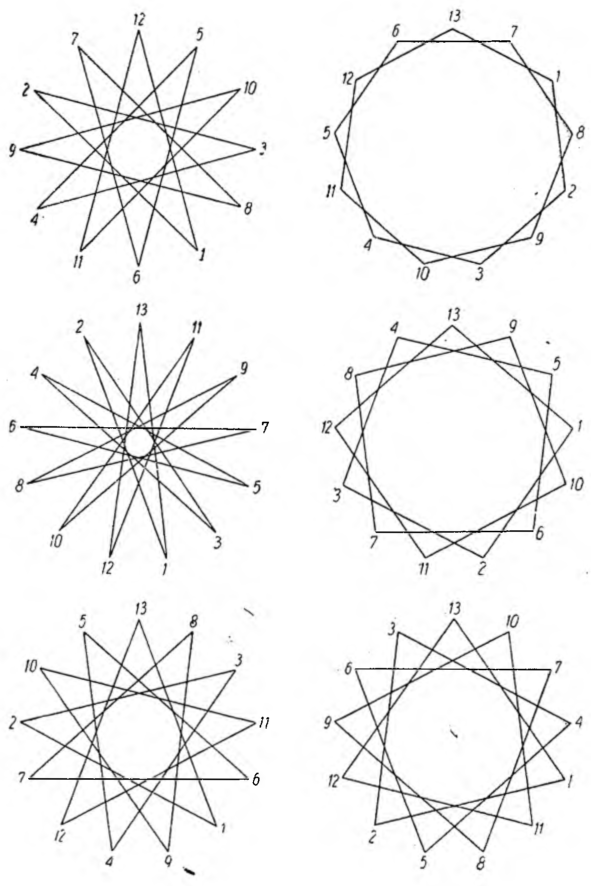 Twelve girls circled and began to play by throwing a ball. The ball was thrown around to the left, then right, but it wasn't funny.
— Rzucajmy co druga — zaproponowała któraś — będzie trudniej złapać …
— Ależ jest nas dwanaście i w takim razie będzie się bawiła piłką tylko połowa obecnych — zaprotestowała żywo Hanka, which was so nearly fluent in number combinations, jak sama lilavati. . .
— No, it's every third!
— Jeszcze gorzej: only four will play, and the rest will just be looking at them .. . if you want, let us all have fun, we have to throw the ball every fifth girl. There is no other combination.
— Dlaczego? why? They called from everywhere. - And every seventh?
— To będzie to samo, only in the opposite direction.
— A co jedenasta?
– Co jedenasta? - That's how we had fun..

They all wanted to believe nothing. You had to see for yourself in the drawing, that Hanka was right after all (upper left drawing).

If there were any fun 13 girls, they could throw the ball every second or third, every fourth, every fifth, every sixth. What if they cast every seventh, it would seem, that the ball is going in the opposite direction.