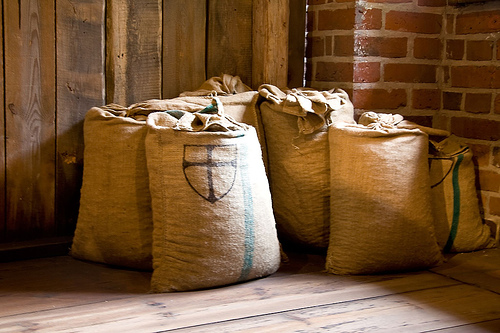 On the farm, which was not very rich in weights, the farmer wanted to weigh puck bags of grain. The decimal weight was what it was, but some weights were missing, so that it was impossible to weigh a weight greater than a half a quintale, and less than a quintal. The bags, on the other hand, had just something above 50 kg.

How would you do in such a situation?

There are different ways out: dividing the contents of the bags into the still empty bellows, tipping, etc.. However, we believe, that way, which this farmer used, is the most . . . mathematical. He numbered the bags and weighed them by taking two in all possible pairings. There may be combinations of these 10; ten therefore received weights, which he wrote down in ascending order: 110 kg, 112kg, 113 kg, 114 kg, 115 kg, 116 kg, 117 kg, 118 kg, 120 kg i 121 kg. He went home with this note and calmly calculated there, and without difficulty the weight of each bag.

You are curious, how he did it? try to solve this problem yourself, and when you fail, look at the lines below …

First of all, you need to add up the weights of all pairs: they will amount 1156 kg. In this weight, each bellows was taken four times; so the single weight of all five bags together was 1156/4 = 289 kg.