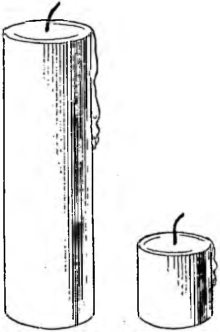 The electric light suddenly went out, so it was necessary to light the candles; two of them were at home "not from a couple", but they were lit as quickly as possible. The next day an argument arose about: how long was the electric lighting interruption. No one strictly fixed this time, neither had anyone measured the candles before lighting them. The other stumps were thrown into the garbage by the maid. The dispute was to be abandoned, when someone remembered, that the candles were of equal length, but one was thicker - like this, which can burn 5 hours, the second is thinner - four hours.
— Nic nam z tej wiadomości nie przyjdzie, since we don't know, how much of these candles are left.
— Owszem, let's try; perhaps the maid noticed, how many centimeters was the length of even one stubble?.
The maid was summoned, which, however, could not give any answer to this question. She just said with certainty, that one stump was four times as long as the other.
— To wystarczy — zawołał najtęższy w matematyce uczestnik tego zdarzenia. And he actually managed to calculate on the basis of this premise,, how long the candles burned. And he did it that way:
The length of the burned part of the candle thinner, four hours, should have been 5/4 the length of the burnt part of the thicker candle, five hours, for originally both candles, although of different thickness, they were equal in height. So the difference in the length of the stumps must be equal 1/4 the burnt part of the thicker candle. At the same time, the difference is equal to 3/4 of the larger and the thicker stub. In other words: 3/4 fat stump equals 1/4 the length of the burned part of the candle. So the whole stump 4/4 states 4/3 • 1/4 = 1/3 the burnt part of the thick candle, or 1/4 its full height.